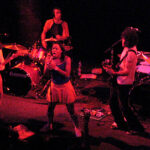 The Go! Team Great American Music Hall San Francisco April 27, 2006 Let me say right off the bat and for the record that The Go! Team live is just as high-energy, fun and off the wall as their album Thunder, Lightning, Strike. For those who don't know them, the group is based in the U.K. and their music is a mishmash of 1970s influenced tunes performed with … END_OF_DOCUMENT_TOKEN_TO_BE_REPLACED