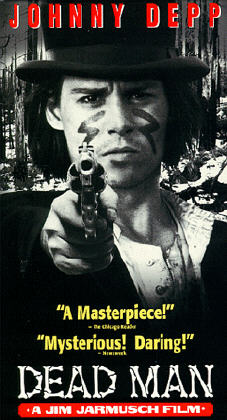 5:00 p.m.: Leave work, but not before changing into outfit for the Big Event (that being “A Conversation with Jim Jarmusch and Jonathan Rosenbaum,” which I have chosen to interpret as “My Conversation with Jim Jarmusch”). Want to look gurly yet sophisticated. To achieve this, put on glittery pink sweater, black miniskirt, black hose, beige fishnets, black knee-high pleather boots. Decide on bus ride home (after offer for Bible study session from man across aisle, and after much self-conscious shifting about) to remove fishnets once at secure location.

5:30 p.m.: Wait for Partner in Crime 1 (PC1—The Boy) to meet up and go for fast dinner at Chinese carry-out place across the street from the Wexner Center (where Big Event will start at 7 p.m.). Fantasize that Jim is in Wexner. Cruise the bookstore just in case. Hope to see him come out for smoke break because Smoking Jim = Sexy Jim (have matchbook on hand just in case).

5:45 p.m.: No sign of PC1. No sign of Jim. Call and leave message on home phone, frustrated that PC1 could forget something this important.

6:15 p.m.: Having wolfed down spicy green beans and tofu carry-out, return to Wexner. Walking into lobby, see Him. He is tall. He is tired-looking. He is already talking to a fan-girl. He seems ready to be not talking to her. Grab PC1’s arm and yelp, “It’s him!” softly. PC1 seems nonplussed. Watch as a member of Jim’s entourage urges him into an elevator. Decide not to pursue. Go down stairs, see another girl in knee-high boots & feel better, more sure of Event outfit.

After a few minutes milling around bookstore, get in line with other eager-beaver fans. Note that this is the first time I’ve ever seen such a line for any event. Feel smart to have been first person to buy tickets for event (before they were even publicized!), but now wish there was assigned seating.

6:40 p.m.: Get inside auditorium, get good seats a few rows back; far enough away from Jim to watch and whisper during talk, close enough for eye contact. Wait for Partner in Crime 2 (April, who you’ll remember from Part 1 of this saga) to arrive. Save her a seat. Wish she’d get here immediately as PC1 seems drowsy and nowhere near own level of enthusiasm, excitement, and anxiety.

6:55 p.m.: Still waiting on PC2. Getting nervous. Event is sold out and don’t want to have to defend her seat to frazzled ushers trying to fill in empty seats.

6:58 p.m. PC2 arrives! Is wearing plaid skirt, fishnets and red sneakers! Has telepathically dressed as perfect compliment to myself.

7:00 p.m. On time, Jim is in the room. Jonathan is, too, but Jim is the one we’re all watching. I squeal softly to PC2. We both get excited. PC2 notes how tall he is as well, and that he does look somewhat like a very dashing Nick Cave (another of PC2’s fan obsessions). He still looks tired, but good. He is wearing a t-shirt featuring an illustration of Superman fighting some villain, jeans, and worn black combat boots. His hair is more gray that we’d imagined, but is still resiliently soft and straight-up. PC2 & I joke about asking what product he uses to keep it that way. We joke that he and David Lynch share a stylist. Then we shut up because the Event is beginning.

7:05-8:45: “The Chronology,” as Jonathan Rosenbaum calls it, in which clips of Jim’s films are shown & discussed, commences. This is a bit torturous for Jim, who says he does not watch his own films, does not like over-analyzing them, and has problems with linear progressions like the Chronology in general. This is all said in good humor, however—he’s not cranky about all this. Other general observations about Jim in conversation: 1) He plays to the audience. After every potentially funny comment, Jim looks at us and smiles. 2) He often appears distracted while listening and does things like fidget with his boots or play with his pack of cigarettes, but he’s really listening, and these gestures are really endearing (and may be because he’s itching to smoke). 3) He raises his left eyebrow to emphasize/punctuate questions. This is tremendously funny and attractive.

Highlights (by film):
Stranger Than Paradise: We learn that Jim did not officially graduate from NYU’s film school. He spent his fellowship money on completing his student film, Permanent Vacation, and because of this and the fact that NYU folks didn’t deem it worthy, Jim didn’t receive a diploma. He did receive one years later, after NYU started using his name in their film school ads. We learn that Jonathan Rosenbaum first saw the STP short in a disco. We hear a great story from Jim about how, after this movie was made, he got a letter in broken English whose author wrote: “If I were stuck in a coffin for eternity but still had consciousness, Stranger Than Paradise is the movie I would want to watch over and over again. If I am ever in New York City, can we have a beer together?” To which Jim replied, “Yeah” (I’m paraphrasing here). And, weeks later, he got a follow up taking him up on the offer. The letter guy turned out to work for JVC & helped secure funding for Jim’s next film

Down By Law: The best stories here are the ones Jim told about Roberto Begnini (imitating Roberto’s (or, if you’re Jim, “Bob’s”) accent well at the appropriate moments). In a discussion about outsiders, both in Jim’s films and in his fandom, Jim told a story about the difference between his and Roberto’s fans. After a day in Rome, in which Roberto was constantly hailed and adored by swank Italian fans (and Jim going largely unrecognized), the two men were walking late at night when they saw two dirty, trench-coated, boot-wearing, punk young men walking toward them. Roberto told Jim, “Jeeeeem, these ones are your fans!” And, of course, they were.

Mystery Train: Odd trivia: The man who plays Elvis’ ghost in this movie is Paula Jones ex-husband. Jim talks about working with non-English-speaking actors. I honestly don’t remember any other really funny/illuminating moments from this discussion. By now, it’s evident that Jim’s starting to get tired of The Chronology.

Night on Earth: Most discussion surrounding this film is about how difficult it was to make, since it was shot in five different cities in cold weather at night. I don’t watch the clip. Instead, I watch as, in the dark, once the clip’s running, Jim lights a cigarette and smokes it. I watch him slowly, gracefully lift, inhale, and lower the cigarette. I hope hope hope that the lights will go on before he’s finished the cigarette. Unfortunately, he finishes it off right as the clip ends. I should note here that there’s no smoking allowed in the Wexner Center. Hahaha.

Dead Man: Jonathan Rosenbaum’s favorite, mine too. One of the two (with Down by Law) that Jim can still stomach watching. When Rosenbaum asks Jim what clip it is we’re going to see, Jim reveals that he doesn’t know; in fact, he didn’t select the clips himself and doesn’t know what they are. In the moment (and long after), this seems charming and funny rather than badly-planned. Jim is delighted by the clip the Wexner folks have chosen (a scene with trappers), it’s one of his favorites.

At this point in the discussion Jim is ready to get on with the Q & A part of the evening. He is really tired of The Chronology & jokes about it to the audience. PC2 & I feel a little sorry for Rosenbaum, who’s trying to stay on track. The two conversationalists decide that it would be a fine idea to take some questions and finish The Chronology later.

Ok, to summarize here: there were two sorts of questions here. The first, we all expect: serious film questions (about technique, or regarding themes in Jim’s films). I’m glad to hear these questions asked and to hear the answers. Most of the information in Jim’s answers to these questions was stuff the audience could have gleaned from past interviews, however. More interesting to me are the other questions (of which there were six): those from the obsessive, fannish types (which would include me & Partner in Crime 2).

During our pre-Event plotting sessions, PC2 & I had decided that we needed to ask Jim about the secret organization to which he supposedly belongs, the Sons of Lee Marvin. It would be a fun question, one that would possibly make Jim laugh or play along, but also one that could go really wrong if he didn’t get the joke or know anything about it. When our crucial question-asking moment comes, I’m the first of the two of us to ask a question, and am worried that jumping into the Sons question might throw things off (mine was the first non-film related question of the evening), so I ask Jim about how he came to know and work with Tom Waits. I want a good story to come of this, but really, the story Jim tells isn’t that spectacular—he basically knew Waits’ music, admired his work, hung out with him one night, and then later got him to make Down By Law.

This question was a perfect set-up for PC2, though, and she boldly interjects as Jim’s answer winds down, asking him for a statement about the Sons of Lee Marvin. And he smiles, and answers, and plays along perfectly. He tells us any of us could be called to join at any moment. And then comes the great Waits anecdote (the one about his meeting Lee Marvin’s real son at a bar in Florida). And then PC2 asks him if a son of Lee Marvin was a Son of Lee Marvin and Jim says “yes” and then says “No. Wait a minute. Maybe he is, maybe not. It’s a secret.” And the whole time he keeps looking right at both of us. And when it’s over, I know PC2 is the best possible person to be sitting next to in that room. We high-five quietly and keep looking at each other and smiling, because the whole thing has happened perfectly.

The other questions are great, too. One is about Jim’s hair (how beautiful and remarkable it is and why he hasn’t ever dyed it red or blue). Another is about the “Fishing With John” episode Jim did with John Lurie (this is the pseudo-shark-hunt). Someone else asks a question (building off of my & PC2’s queries) about Screamin’ Jay Hawkins, who Jim describes as a “universal treasure.” Perhaps the best is a question about what Jim values in American culture and in humanity. This leads to Jim talking about his regard not only for human life, but for all life (animal, vegetable, even rocks) on the planet. He discusses current political/national events and critiques American nationalism and isolationism in this context as well, and is articulate and thoughtful.

9:25-9:35 p.m.: The final Clip
Ghost Dog: This ended The Chronology. With little time left, we watch the clip, Jim lights a cigarette for Jonathan Rosenbaum, and when the lights come up we all clap & say goodnight.

6:28 a.m. (on a Saturday, the morning after): I wake up, start thinking of Jim. Lie in bed and smile. Wait for PC1 and PC2 to wake up so I can tell them how perfectly well the Big Event turned out, how I didn’t think I could like Jim any more than I did before, but really, I do.