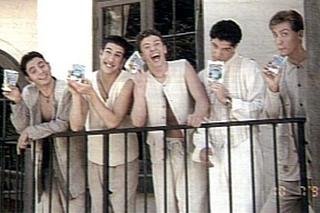 …And I lovers Amanda, because she lent me the first *NSYNC CD to listen to. And I’ll probably burn it tonight. Then I’m checking myself into therapy.

Oh Melynee, you would’ve been so proud of us. Or really, really frightened. You know the “Lucy,” AKA “you’ll see” song? We can’t stop playing it. Or singing it. When we get in the car, the damn thing goes on repeat.

We’re damn good at it. And we’ve choreographed the entire freaking thing. We need to add in a few foot moves, since most of our work has been done, brilliantly, in the car, but you will all be impressed. Oh yes. It’s beautiful. Even JC would be happy. He of the literal dancing. Yep. We worked most of it out with him in mind. We are disturbed though that ‘the scent of you still lingers in my mind.” We have some theories on what the hell the string of cliches, random ones, mean, but I’ll let Amanda share that with you. She’s better at it than me.

I can’t even tell you how many times I have sung that freaking song this weekend.

Obligatory “Melynee is the devil.”

Next question…Michelle? Responses to The Boys 6 stories tall? Please?

Also – listening to the UK Edition of NSA. And there seems to be a lyric about “this music being the best of all time” or some other nonsense. I can see I’m going to have to go search for the exact line.

Mwahahahahahaha. Did you watch Amanda swoon over the Lance sex voice on the first album?

So, Okay. What the song really means, by Michelle and Amanda.

I’ve been staring at your picture every night.
(Stalker)
The scent of you still lingers in my mind.
(Ew. And, also, no. Just ew.)
I wonder if you’ll only feel all right.
(Most debate here. When he holds her, maybe it just feels okay. Not great, but okay. Or, maybe, she’d feel okay, emotionally, if she’d just let him hold her.)
And the sun has come out of the clouds.
(It’s sunny, but he’s still sad)
And sometimes when I listen to our song,
(Aww. Jup is cute)
The night seems so cold and far too long
(Aww, poor Jup)
I want to call you up, cause in the end
(Why can’t he call her? Maybe she’s moved out of the country)
I keep writing letters to my garbage can.
(That’s a lot of paper he’s throwing away. Symbolism!)
Lately, feels like I’m going crazy
(You weren’t crazy before? Oh, right, he’s crazy sad)
Baby, come and lay down beside me
(Side note from Amanda: if Justin asked, I would, and I hate him)
If I’m not the one you want, you’ll see
(I hate the “who’s he” theory. I like this better. Or, also, Lucy)
Take the time to figure out, you’ll see
(He’s giving her space)
If I’m not the one you want, maybe I’ll be the one you need.
(Physically, you’ll need him, see. You’ll crave him. If only you let him hold you and stuff.)
I feel that it’s on you I can depend
(Grammar!)
Wish I could turn back the hands of time
(Poor thing fucked up, maybe more than once.)
No more building castles in the sand.
(He’s tired of instability)
Why can’t we be forever?
(Unlike a castle in the sand, see? It’s symbolic)
Repeat chorus.

…And nearly choked to death over the new opening. Oh gurlies. You must go, if only to see that, Officially, it appears that Lance and JC have been paired, Chris and Justin look like they’ve been paired, but then, no, it’s Joey who gets Justin at the last second, and poor poor Chris ends up alone. At least, that’s if I’m reading the sillhouettes right.

In other news, yes, the lyrics are mostly right. ‘Cept that third line should be “I wonder if you’re alone and feel alright” and “If I’m not the one you want, then who’s he?” is indeed the correct lyric. “You’ll see” only comes after “take the time to figure out.” I knew it wasn’t a theory. *bap*

Artistic integrity? In regards to the boys? Pardon me whilst I guffaw.

I’m sorry Melynee, but Amanda and I both agree, we are putting our foot down. It is not “who’s he.” That is stupid, and blows the romance of “Lucy”.

Also… there was an also. It’s here somewhere.

Amy, you win in the obsessive race because, while I did drive there, I did not find out where it was, and I did not call the local IMAX to find out if it was coming. Mwhahahahha! You had to do research. You win!

Justin the marionette took a nosedive. He seems to be okay, for one who just landed on his head. I have a feeling the real Justin would be okay with landing on his head, too. Just a small feeling.

I kind of like “I wonder if you’ll only be all right” better than the “official” lyrics, too. willa? Your opinion?

I just received a phone call in which I was requested to loosely dictate a message to Michelle and Amanda:

If you continue to choose to ignore the *true* lyrics of the Lucy song, continuing to sing “if I’m not the one you want, you’ll see” instead of “who’s he?” – then you are thereby denying the implicit arrogance of the song.

You are denying Justin and his frustrated ego their right to shout, “oh yeah, well, if I don’t have everything you need, then who the hell else could? I’m da numba one! ME ME ME ME ME!” (or something like that)

This, my friends, is integral to the deep meaning of the song – and goes along with the continuous stalker feel that the album has worked for.

To deny these lyrics is to deny the boys their obsessiveness.

Which, apparently, is a bad thing.