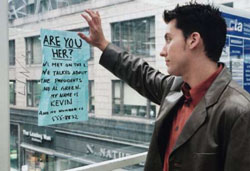 And you thought it was just a movie with cute boys in it.

There is a whole wealth of information hidden in this movie, for those who take the time to look. And because we here at PopGurls are all about generosity and selflessness, we are here to let those of you who haven’t seen it as many many, many times as we have in on a few of these crucial, sublimated messages that Mr. Bass and Co. are trying to foist upon an unsuspecting public.

You can thank us later.

Forget about the “proof” of Lance’s het status as demonstrated by the number of times Kevin and Abbey very unfortunately kiss. Here are the On the Line stats that really matter, and what they should mean to the viewing public.

One Plot is Never Enough
Apparently, the audience of today – raised on a quick-cut culture of MTV and video games – suffers from a sort of collective ADD. We need lots of stuff! Happening! All the time! Stick us with one plain, simple, boy-meets-girl storyline, and we get bored and wander off in search of candy, or a magazine. So, instead of just watching Kevin and Abbey find and lose and find each other, we were treated to a smorgasbord of subplots including, but not limited to:

Buy, Buy, Buy
Aside from the producers and the studio execs, there’s another whole host of people who are hoping to make some cash from this little flick, and you might recognize a few of their names. The Award for Most Blatant Product Placement goes to…

And that’s just the tip of the iceberg.

Why Lipreading Can Come in Handy
Lance wanted all of his fans to be able to see his movie. A noble thought, dear, but is there a reason you didn’t have this thought until after the whole thing had already been filmed? Hmm? Because the result is some of the most awful over-dubbing we have ever had the misfortune to witness. And who decided which words were objectionable? Really.

Then there’s the few “did they or didn’t they” moments:

Kevin the Clotheshorse
Ok. The color was bad when we attempted to compile this list, so the exact shades may be slightly off here, but we counted at least Nine. Separate. Ties.

And, y’know, at least three others. Green. Maybe purple. And they match his shirts! Exactly! We understand that, for guys in the corporate world, ties are the one place you’re allowed to show off a bit. And we hate to sound like we’re stereotyping or anything, here, but the only other straight guy we know who pays this much attention to what he’s wearing is, well, Ricky Martin.