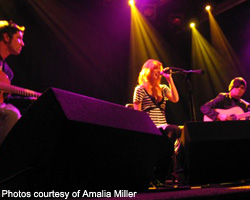 “An Intimate Evening With Esthero.”

“Drunken Story Telling With the Coolest Pirate Around.”

Call it what you will, but it was obvious from the moment Esthero (affectionately known by fans as The Pink Pirate, or Lil’ Dukes Up) sauntered onto the stage at the Independent in San Francisco with a bottle of Jägermeister in hand, that this would be a show audience members wouldn’t soon forget.

“Typically my band is as big as my ego,” Esthero joked before launching into an explanation of why she’d strayed from her normally 10-piece band in favor of a more stripped down show with her brother Jay and band mate Ricky Tillo, both on acoustic guitar.

“An Intimate Evening with Esthero” (the show’s actual name), an acoustic benefit with proceeds going toward the Philippines Landslide Relief, was the brainchild of Esthero’s best friend Rina. In the beginning, there was only going to be one show held at Supermarket in Toronto, with Esthero being one five Canadian artists on the bill.

“I was only supposed to be on stage for 20 minutes, but then I got drunk and rambled for an hour and a half and we knew we had a show,” Esthero said.

The acoustic set was so well recieved in Toronto that Esthero and company decided to try it out on the road with a small three-show California tour, with stops at The Casbah in San Diego, The Roxy in Los Angeles, and the one I attended (with several friends in tow) at the Independent. Esthero explained to the crowd that they only had one song prepared, and the rest of the show would be based solely on their requests.

She started off with “If Tha Mood,” a racy little number about knowing that your ex boyfriend/lover’s new lady could never please him quite the same way you could. I was amazed that backed by only acoustic guitars this song came across as powerful and seductive as it does on the CD…I guess that just goes to show that all that power comes from her sultry voice. Esthero, who recently relocated from Toronto to Los Angeles, moaned a mocking “That’s Hot,” after finishing the song, quickly declaring her dislike of Paris Hilton.

“Has anyone ever heard that bitch formulate one complete fucking sentence? THAT’S HOT!” Audience members appeared to be in agreement, cheering and laughing at The Pink Pirate’s impersonation of the vapid Miss Hilton.

Fans quickly took the opportunity of the break between songs to begin shouting out their requests. The uproar of voices was a bit overwhelming and Esthero called out to audience members for someone to buy her a “shot of Jäger.”

She dedicated the next song, “Amelia,” to her MySpace fans, who had been made aware of the unreleased song after Esthero posted it on her page along with other material that was recorded, but not included, on her last record Wikked Lil’ Grrrls. Esthero dove into the first verse of “Amelia,” but was quickly presented with that shot of Jägermeister (at one point another fan brought her a rather large cup half-full of the stuff which she sipped on for the rest of the night). “I’m so torn,” she whined before jumping ship on the song in favor of the shot, then telling her brother to take it from the top and starting the song again.

Esthero took a poll of how many of her fans had MySpace accounts (most of them) and more importantly how many of her fans were down with all her MySpace profiles – she has three, her music space, her personal profile and one dedicated to her Shitzu, Oboe. She then told the audience she had someone she wanted them to meet. She went backstage and appeared seconds later with Baby Oboe himself, sat down with him in her arms and sang his theme song “Baby Oboe, he’s the wonderful magical mystical. Baby Oboe, he’s so loveable, huggable, kissable…Baby Oboe, he’s a DOG! Ruff.” Esthero planted a ton of kisses of the furry little guy’s head and placed him on stage where he ran around by her feet and growled at people from the stage (it was more adorable than frightening).

“This is the first time I’ve been able to bring him on stage with me,” she purred. She may have thought twice about bringing her beloved pup on stage, had she known what was about to happen. As she was singing the über sexy “Superheroes,” a track from her first album Breath From Another, Oboe – no doubt put in the mood by the vocal stylings of his owner – wandered up and began humping her leg. He did this for pretty much the entire song, but Esthero didn’t miss a note and when she was finished she criticized Oboe for having “a loose grip and tiring out too quickly,” then added “I’ve always said I’m the only person who’s never fucked to that song…apparently I’m irresistible.”

Esthero pretty much obliged every request from audience members, with the exception of “sing the Everything But the Girl remix,” to which she responded “That’s not even my fucking song!” Then she laughed and made it clear that she knew a good percentage of audience members had gotten a lot of her work by using peer-to-peer downloading services. “I know what you guys are, you’re a bunch of Lime Wire users who download all the unreleased stuff and stuff no one was supposed to hear, meant for video games…half that shit that comes up under my name isn’t even me.”

Someone who was clearly a Lime Wire user requested “A Better Life,” a track Esthero had collaborated on with house producer Ian Pooley. “You would be into house music in San Francisco. What a fucking cliché,” Esthero teased, before she and guitarist Ricky Tillo, who pretended not to know how the song went but did a pretty damn good job of faking it, got funky with a very stripped down version of the song.

Covers were not in short supply either, with Esthero and brother Jay doing a haunting cover of Concrete Blonde’s “Joey,” and the Lemonheads’ (one of the bands Esthero admits can still make her scream like a 12-year-old girl) “My Drug Buddy.”

Perhaps it was the Jägermeister, but Esthero did a lot more talking than singing, though she did sing a lot of songs. Before she started a song she’d say something like “Oh, let me tell you about…” then launch into a story about how the song came about, usually backtracking to tell the back story. She told stories of a drunken encounter with Prince (who had played her video for “We R In Need Of A Musical Revolution” on his website), which resulted in her being invited to “funky parties at the mansion.” She dished about her recording session with late TLC member Lisa ‘Left Eye’ Lopes (she was the last person to record with Lisa before she died in a car accident in Honduras) which was a humorous little anecdote about how late one night she got ‘Left Eye’ to ditch her strict vegan diet in favor of a Krispy Kreme doughnut. She told many stories, so many I can’t even remember them all and I could never do them justice by trying to recite them.

Tthe most impressive, hilarious, thing Esthero did on that stage, in my opinion, were her Björk impersonations. Esthero claims to have only recently discovered that she can sound spot-on like Iceland’s most successful export, not only in conversation, but also in song. She mimics her whispery hiccup voice so well that this claim is hard to believe. “Get ready to laugh,” she told audience members before launching into Björk’s “Possibly Maybe,” which sounded so dead-on like Björk herself, that I swear if it was played for even the most hardcore Björk fans, they wouldn’t be able to tell the difference.

Two and a half hours after Esthero started her set, her brother whispered into her ear, undoubtedly telling her what time it was and exactly how long she’d been on stage, prompting the Lil’ Dukes Up to bid goodbye to her fans. She ended the set with “Heaven Sent,” and as she sang the verse “I’m not heaven sent,” it was clear that fans disagreed and could have easily spent another hour listening. Given her ear-to-ear smile and the fact that her cup of Jägermeister was not yet empty, I’m sure she would have happily gone on.