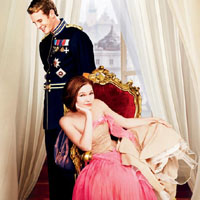 I realize that very few people will believe what I’m about to say, so I’m just going to put it out on the table, and let the mocking begin. The Prince & Me, the latest in a group of romantic comedies about lovers from the opposite side of the tracks, has one of the sexiest moments in recent cinematic history. With a brief clasp of hands, fingernails scraping across an open palm, and a lingering glance, an entire theater of women went up in flames with a chorus of sighs.

That’s not even the only reason you should see it.

It’s a shame that most folks are going to write this off as another silly “chick flick.” Julia Stiles and relative newcomer Luke Mably have actual chemistry – the kind where a simple kiss is just the icing on the cake, where you’re already rooting for them to just do it already, because the way he’s staring at her is making you swoon. The writing is predictable, but smart. The story is an outlandish fairy tale, every little girl’s dream, but the happy ending is a little bit faulty and not entirely certain.

Stiles plays Paige, an ambitious farm-raised pre-med student whose goal in life is to work for Doctors Without Borders. She’s the kind of Midwestern girl who has deep roots and a close family, the kind with her head screwed on tight and straight. Her high school friends are all settling down before college, and she’s not about to let that happen to her. Until she falls in love with the bratty Prince of Denmark.

Let’s pretend for a moment that said bratty Prince was not lured to America by the promise of a “Girls Gone Wild” advertisement. That’s a silly, flimsy excuse, because Edvard is obviously running away from the fact that he will one day soon be King. Like many young men, he wants to make his father proud of him. He’s just not ready to do that quite yet. A tabloid regular, Edvard finds himself and the courage to accept the crown by finally falling in love.

The cast of supporting characters is hardly worth mentioning. Edvard has a trusty manservant who has a couple of good scenes, including an amusing duel with an Xbox. Both Paige and Edvard have parents who want the best for their children, but exist primarily to deliver platitudes and then disappear. There are siblings, protective on Paige’s side, eager on Edvard’s. But none of these people can stand up to the light of the happy couple.

The Prince & Me is about the relationship, for sure. Edvard and Paige have a short courtship (that involves a brilliant lawnmower race) and then they plunge headfirst into making out in the stacks of the university library. After a brief estrangement, he literally sweeps her off her feet onto the back of his horse during a royal parade, during which the loving people of Denmark cheer at the arrival of their Prince’s Yankee girlfriend. Edvard defies his mother and finally embraces his father, all because of the changes Paige’s love has wrought in him. Ah, young love.

What’s more important, for the teenaged girls who will go to see this movie, is that Paige has to choose between the life she’s always dreamed of and the life most girls don’t dare to wish for. Her choices are to go to Johns Hopkins’ medical school and travel to impoverished countries doing good, or to be with the man she loves and be doomed to a life of ribbon-cutting ceremonies and being a pretty figurehead. Or are they? I’ll never tell.

It’s worth the price of admission for you to find out.