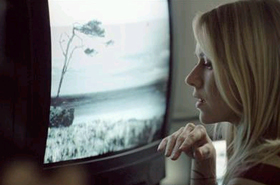 According to Amy nothing freaked her out more about this film than when I, “scary movie goddess” proclaimed The Ring one of the scariest movies I’d ever seen. Before I’d gone, I had heard and read nothing but good things about it. Yet, the website was cryptic, as were the TV commercials. I was intrigued by the fact that all the press about the movie gave insufficient amounts of information, and as a lover of all things horror, I was more than a little excited to see it.

Imagine then my utter happiness when my boy and I lucked out with tickets to an advance screening. In line, we alternated between elated “I can’t wait”s and downtrodden “this better not suck”s. We got us some popcorn, found a couple of seats and sat back prepared to be either completely terrified or irreparably disappointed. Luckily, the latter reaction never once reared its ugly head.

The Ring is a remake of a Japanese movie, Ringu, and there was much speculation and arguing going on over the internet about how the original was better and more imaginative and American movie makers suck and blah blah blah. Now, I’m sure the original is fantastic. If it’s anything like The Ring I saw, it has no choice but to be. I have yet to see it, so I can offer no opinion. But, as always, the masses will have their say and those with nothing better to do will bash or embrace both or either the Japanese and American versions.

The movie opens with two very cute friends, Katie and Becca, hanging out. Becca tells Katie about a mysterious videotape that has the power, once you’ve viewed it, to render you dead seven days later. Katie listens with her eyes growing in terror. She then informs Becca that she and some friends watched this mystifying tape exactly a week ago with some friends at a cabin in the woods, and, like any other wise ass, Katie pretends she is choking. The girls have a laugh and quickly forget about it.

What happens next is, well, frightening. The TV turns itself on, even after Katie shuts it off. The refrigerator door opens, seemingly of its own accord. At this point, Becca has gone back upstairs, and Katie moves tentatively to find her. Is Becca fucking with her or is the legend of the tape coming true? I can’t tell you as I wouldn’t want to spoil all the fun, but suffice to say, you will be shocked and might even let out a yelp.

The rest of the film follows Rachel, Katie’s aunt, as she searches for the truth about the tape. The story behind it is quite an interesting one. Also, a very unnerving one. The origins of the video and odd occurrences resulting from it are explained as supernatural psychic phenomena, centered on a little girl. The story unfolds nicely, though rather cryptically, leaving some details to the imagination. My one complaint, if it could be called that, is that there wasn’t enough information given about this girl before the video “incident,” but much like Jell-o, there’s always room for a sequel. There aren’t many twists and turns, but it’s not predictable either. And the ending! That completely blew my mind. And when they show you how the tape “works,” I almost lost it.

Usually the people in movies are stupid. Checking out scary sounds and going into darkened basements and such. The characters here are only slightly more intelligent, but come on, who would believe watching a video could kill you? It’s like an urban legend for the Amish. Who would know you’d watched it? And seriously, who would really care all that much? If you ran and hid, you’d be fine. Ahhh, how wrong you are my foolish uninformed reader.

The Ring blurs the line between right and wrong just enough so that you can identify with the wrongdoer. And the one doing bad shit isn’t necessarily the bad guy. And the bad guy isn’t even necessarily the bad guy. It’s a nightmare, literally, for all involved. All because of a video. Something that normally brings such happiness. It is the recorder of shows we might have missed because of pesky commitments. It is a projector of movies we may have let pass in the theater. It is innately good. And it doesn’t even have sharp edges like a DVD. How could it be bad? Murderous even? You’ll see. And when you do, you won’t be sorry.