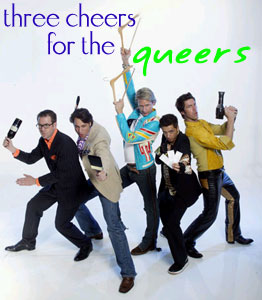 Thank god the Bravo network has decided it doesn’t give two snaps about Middle America. Queer Eye for the Straight Guy, which premiered to more buzz than my gay office has heard since family favorite Clay bit the big one, is easily the gayest TV show ever. (I’m including in my survey the original Divas Live.) It’s also the funniest thing I’ve seen all summer.

Queer Eye is helmed by five flavors of fabulous, ranging anywhere from “Esquire” effete to fully flaming. There’s a fag for every hag — Carson, fashionista and obvious breakout star (somebody offer her a solo album already!); Thom, color queen of the living room; Kyan, hair and grooming maestro, Ted, chief counsel for the Twinkie Defense; and Jai, culture maven. Their mission, which they accept with the requisite bitching, is a makeover-slash-home improvement for that most stately of models — the most straight, least-cool Joe Average on the block.

Except none of the token straights is really all that average — unless they’re some new standard for enlightened, comfortable slab-of-manly-man. As long as the straight boy can put up with being poked, prodded, groped, goosed and teased within an inch of the family jewels, the Fab Five are dedicated to the cause — getting their charge a little more glamorous, and, hopefully, a little more laid.

The queer guys cheer on their player’s romantic quests like a squad of Laker Girls, whether it’s helping an up-and-coming artist to land his Mona Lisa or getting hubby out of the doghouse for forgetting his wife’s birthday – again. They’ll cut off his hair and boil his jockstrap, but no matter how Carson flirts or mocks — “There’s a hooker in Trenton who wants her boots back,” he howls when one Long Island rocker chick shows up in knee-high stilettos — no one’s on a conversion mission.

Like any makeover show worth its pomade, the highlight of the hour is in the reveal. In the most well-decorated Sunday Superbowl party set ever, the queers congregate in front of a flat-screen in coordinated outfits, sipping their cocktails and narrating the action. “Oh, we’ve got a gasper!” Carson squeals, as one girl covers her mouth at the transformation. “There’s my boy!” crows Kyan when the guy remembers the correct way to achieve properly chic bed-head.

Their pet project has to shower, style and get dressed all on his own. He even has to cook, or finish cooking, whatever menu Ted has prepped. Then he has to conquer his own fear of flying, whether it’s a gallery opening or a co-habitation proposal.

From the Sex and the City-style credits to mid-segment GQ 101 tips (“Exfoliate before sunless tanning!”), each episode is an escalating anthropological experiment of the inhabitants of Straightsville. The early results seem to indicate a very obvious, very predictable pattern: Women like it when men cut their hair, do their dishes and clean the bathroom. If they can be confident and talk about their feelings every once in a while, that’s just a bonus. In even more shocking news, men like being the center of attention and will put up with just about anything for the pleasure of having five people fawn over them – even if that focus comes at their own expense.

And that, little ladies, is the sly, subversive subtext of the show, what elevates Queer Eye above campy reality. Finally, after years of being the throwaway punchline, the butt of every butt joke is not the sad queen in the kimono. It’s the straight man.

Lucky for those of us who prefer our heroes a little bent, no one here is crying homosexual panic. These are truly the coolest straight guys ever invented. They’re so cool I’m not even sure they’re real. Are they the poseur pansies we’ll see on Bravo’s upcoming gay dating show Boy Meets Boy?

In hopes of nailing the gay vote, sister station NBC is now airing a half-size version of Queer Eye on Thursdays after Will & Grace. Call me a size queen, but it just doesn’t pack quite the same punch. We need the full hour to examine the real gay agenda. Will the Fab Five become bitter and burned out? Will they run out of shock at the sorry state of the straight guy? Will any of the girls be worthy of their new-and-improved boy toys?

It’s probably best not to think too hard about the man behind the curtain. Someone get Mama a drink. I’m settling down for the summer with Bravo and TV’s five best boyfriends.