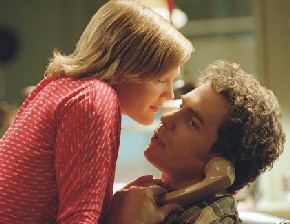 Confessions of a Dangerous Mind is either one of the slowest-paced movies in recent history, or it proves that all those studies about the shortening of the American attention span are true. It’s 113 minutes of plot, oozing along at a snail’s pace.

Directed by George Clooney, Confessions is a semi-autobiographical telling of the life of Chuck Barris, creator of cheesy game shows by day, killer for the CIA by night. Starring Sam Rockwell as Barris, the film has a truly all-star cast. Drew Barrymore is the one who almost gets away, Julia Roberts is a convenient sex partner in on Barris’ secrets and Clooney himself appears as a recruiter for the CIA. Given this much high-wattage, otherwise engaging talent, it would seem impossible to make a film so flat.

In the script by Charlie Kaufman (Being John Malkovich), based on the novel by Barris himself, the film-Barris manages to remain emotionally unattached to everything except for his career in television. The shows he creates are his babies – The Dating Game, The Newlywed Game, The Gong Show – and each time one of them falters he suffers immeasurable anguish. He is incapable of feeling similar pain at the loss of a romantic relationship or, worse, he does not feel guilt about the dozens of people he kills. This detachment is transferred to the viewer, who watches the characters play out their lives without ever having empathy with them.

The one bright spot is Barrymore, whose character Penny likewise serves as the bright spot in Barris’ life. Penny ages gracefully through the decades, changing hairstyles and politics with the years, but remains loyal to Barris even as he sleeps around and keeps dark secrets from her. Barrymore’s unstoppable perkiness, though, is out of place next to the flat performances of the other supporting players.

Clooney’s directorial mantra was, perhaps, “contradiction.” The Hollywood of the Confessions world is bright and garish, full of excess and no-consequences behavior. In contrast, Barris’s secret life with the CIA is dark and gritty, where death begets more death in retribution. The comparison is easy, like night and day, except the characters (again, Barrymore is the exception) do not play by these rules. TV producers, undercover assassins, cameramen, or suspected communists – they all carry on with the same level of seediness as if there were no difference in their day jobs. So, are the two worlds different, or are they the same? Clooney can’t decide.

What is clear is that neither is very exciting. There is both inherent and scripted mystery in Barris’s story, yet the translation to the big screen managed to leech out all the parts that would have made unlocking that mystery exciting.