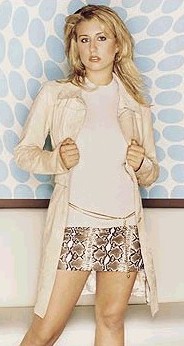 [Caveat: It is true that Meredith Edwards’ CD, Reach, is the first release from Lance Bass’s management company, Free Lance Entertainment. It is also true that Meredith was one of the opening acts for *NSYNC on the East Coast leg of their tour. Finally, it is true that I have a certain – shall we say – affinity for Lance and *NSYNC. But I feel the need to mention that I would not have purchased this CD if I did not genuinely enjoy the country genre every now and then, and if I hadn’t also genuinely enjoyed Meredith’s performance when I saw her live in June. Just so, you know, no one thinks I’ve been more influenced by cute boys than usual.]

Meredith Edwards has been compared many times to Faith Hill. Perhaps it’s that they are both blond, or maybe it’s because they are both popishly country. I prefer to compare her to Martina McBride, a country artist who has managed to grow throughout her career without abandoning her twang and the steel guitar (and who has not tried to talk me into buying bad wireless phone service so that I could call my father from my limo on his birthday).

Reach is actually quite mature for a debut album, especially considering that Edwards was either 16 or 17 when the bulk of it was recorded. Unlike similar albums from teen pop divas, most of the songs on Reach are not about sex and betrayal, but are instead about the giddiness of love and enjoyment of life. Being country, there are a few he’ll-never-love-me-boo-hoo songs, but the majority of the material here is rather perky and refreshing.

The first single, “A Rose is a Rose,” seems to be an odd choice for introducing an artist. It’s a nice song, as songs go, but there really isn’t anything very distinct about it. Sure, it’s got mushiness that makes me tear up against my will, such as: Tommy Lee always knew/What he would do/’Cause she moved him deep down in his heart. It’s somewhere between a ballad and something a little faster, and even though my parents are quite good at two-steppin’ and other assorted country dances, I’m not sure what they could do with this out on the floor. In contrast, the two songs “In Any Given Moment” and “Ready to Fall” (incidentally, the latter has a rumored appearance in the movie On the Line, featuring Lance Bass and Joey Fatone) are ballady bits that you could scoot around the floor to while holding your honey tight.

The quick stuff is, for the most part, the kind of music that is most likely right smack in the middle of your vocal range and perfect for rocking your hips and swinging your arms around because of the fun. “Beautiful Mess” and “You Get to Me” (with or without the painter references, Melynee) are especially good for this. The first is a romp about how fucked up it is to fall in love, how it leaves you hot one moment and cold the next, while the second is best summed up with the lyrics I’m helpless/I’m breathless/I can’t guess why you get to me/I’m falling/So hopelessly/Oh you, oh you get to me. See? It’s fun!

The title track shows up late in the album, and if I might pull out the comparisons one more time, I think it sounds a little bit like a Mary Chapin Carpenter song, if Mary was still a teen. It’s light on the accompaniment, so you can hear that Meredith has a truly amazing voice, and it all sort of just pours out in such a pleasing way that it hardly matters that it’s sort of schlocky. It might, in fact, be tailor-made for weddings: Just reach, reach/Reach out to me and I’ll be there/All that you’ve got to do is reach, reach/Hold out your hand/I won’t let go/This love’s ready to begin/The answer is just within your reach.

There’s really nothing here that I don’t like, except for two songs that suffer from questionable lyrics, and this is country so it’s not like the inanity is hidden behind rocking guitar solos. “The Bird Song” is, um, about a bird. Yeah. Meredith is a bird who flies around and people-watches and tries not to get eaten by a cat. The truly sad thing is that the song is way catchy, and I find myself singing it around the house often, only to stop in horror when I realize what I’m doing. “Slow Learner” is odd in the way that I can’t decide whether or not it’s offensive to my female sensibilities or not. It’s about a girl who knows her crush isn’t going to like her, but keeps going back to get hurt over and over again, and she’s “slowly learnin'” that he ain’t ever gonna love her. It makes me cringe. And the line, I was never good at chemistry, that’s why it’s so hard for me to see we ain’t got none… Well. I just hope you don’t let that stop you from buying the album.