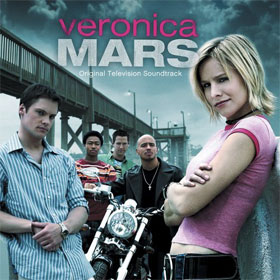 Unlike a movie soundtrack where you have roughly two hours from which to choose music, a TV compilation has a whole season or two of music from which to cull a dozen or so songs. It’s virtually impossible to make every fan happy because inevitably some meaningful song will be left off. In the right hands, a TV soundtrack can bring you back to the moments that made you fall in love with a show over and over again; in the wrong hands, it’s just a smattering of songs on a CD.

I was burned by the My So-Called Life soundtrack back in 1994 (god, has it been that long?) — there was no Ricky dance-off “What is Love?”, no Angela rock-out “Blister in the Sun,” and certainly no Ramones Rayanne freak-out “I Wanna Be Sedated.” Nowhere did we get the Jordan-penned “Red” which always reminds me of hanging out in garages, listening to cute boys play music. Sure, they got Buffalo Tom in there, but it was “Soda Jerk.” A good song indeed, but it’s nothing compared to “Late at Night” when Jordan finally crosses the hall to take Angela’s hand in front of everyone. As you can see, my bitterness is still strong more than a decade later.

So I was a bit skeptical when approaching the Veronica Mars soundtrack. For those who’ve yet to tune in (people, what are you waiting for? Let’s get going!), Veronica Mars is a series with an impressive pedigree of musical selection, driven primarily by the series creator and executive producer, Rob Thomas. Thomas handpicked the songs on the soundtrack — most of which will be featured in the second season. The set list, and the obvious omissions of much music from the first season, has given pause to fans who love the music that’s already been featured and would have loved to see more of those tracks on the CD. Thomas explains why only four songs from season one made it on: “The thing about any collection or soundtrack is that you’re getting songs that have already been released… [those don’t] seem as special as [the songs] the fans are all trying to search out. And I feel like -– “here they are! The songs that you couldn’t find, that you loved –- here we are, giving them to you.”

The music itself flows beautifully from one song into the next. It kicks off with the theme song “We Used to Be Friends,” the brilliant Dandy Warhols track that sets the feel of each episode with it’s sharp sound and underlying reproach. You can just imagine Veronica staring down former friends, now her foes with the single line We used to be friends a long time ago, but I haven’t thought of you lately at all. The album then kicks in with a preview of what’s to come in the upcoming season, “I Hear the Bells,” a catchy and melodic offering from former Soul Coughing frontman Mike Doughty. This is one of those songs that starts off good and keeps getting better and better and you immediately want to replay it as soon as it’s done. Spoon’s “I Turn My Camera On” is a very sexy, very seductive song that could pop up often in upcoming episodes. Thomas says, ” I can use that in 10 different Veronica Mars episodes, anything when she’s doing surveillance and following people around.”

Straight from the UK, The Faders contribute the bouncy rock of “No Sleep Tonight” which dares you not to move your butt along. Trust me, just give in. (Also, keep your eyes peeled as Veronica Mars cast members will apparently be in the video for the single.) Stereophonics’ “Dakota” reminds me of something you’d find on the Pretty in Pink soundtrack (another good one that you should pick up) — and keeps you moving along with the new wave beat.

Since I’ve gotten the CD, I’ve had it in heavy rotation, often playing it as background music when at work. The one song that always pulls me out of what I’m doing is The Format’s “On Your Porch.” By the second verse, I always stop and take a moment to just listen. I’m quite anxious to see how this will be used in the show, as I’m sure it’ll beautifully, and powerfully, underscore some scenes. The Perishers’ “Sway,” Ivy’s “Ocean City Girl” and Tegan and Sara’s “I Know I Know I Know” rounds out the rest of the slower songs nicely.

The already familiar songs on the CD are the incredibly haunting and mesmerizing 46 Bliss’ “The Way You Are” (10 points for the MSCL reference) from the episode “Silence of the Lamb.” Something Happens’ “Momentary Thing” is known to Veronica/Logan ‘shippers round the world as it emphasized the intensity of their first kiss — a song and moment that Thomas calls “both sexy and uncomfortable… filled with question marks.” Finally, closing out the CD is Cotton Mather’s aptly titled “Lily Dreams On.” It’s a perfect end to the first season as well as the soundtrack, with its layered harmonies and wistful, yet hopeful mood.

Fans of Veronica Mars will love the soundtrack not only for songs that they’ve already fallen for, but also for the great new ones they’re soon to add to their favorites. But you don’t need to be a fan of Veronica Mars to enjoy the CD — just a fan of damn good music.