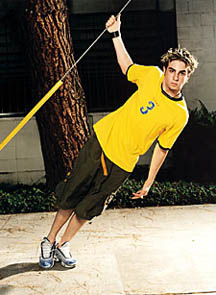 I really hadn’t planned to watch The Wade Robson Project. I’m not a huge fan of competition shows, and I only tune into the American Idol audition episodes for the entertainment factor. Once it focuses on people who can actually sing, I’m not interested. So I figured that it would be the same for TWRP. Except, one day while cleaning I caught the pre-show special in which Wade Robson was surprisingly endearing and charming. Quite endearing and charming, which was a sentiment echoed by many friends who had felt the same about the contest. In one hour, folks that had dismissed (or even mocked) the idea of Wade’s show were suddenly anxiously awaiting the premiere. So, me, the gurl who never watches competition shows, has seen just about every episode of TWRP.

I was right – Wade proved to be quite charming and earnest. He’s got a great sense of humour and isn’t afraid of looking like a dork which only made him even more appealing. And most of the dancers were fantastic – My officemate Roth and I would stop what we were doing to critique each one – who had real talent, who was the most versatile or could only do moves they had rehearsed over and over again, and who got robbed. We usually nailed who would make it into the semifinals, but there were certainly times when we’d sit, jaw on floor, because the judges picked some scantily clad hoochie-mama over someone who could actually dance.

See, the judges here are more America’s Most Talented Kid (which also scored an *NSYNC member as a featured judge) than American Idol. Some were singer/dancers like Nick Carter and JC Chasez, some were choreographers and dancers, and then there was Murphy Lee and the like. If you didn’t know, Murphy Lee had an album coming out on September 23rd. If you ever saw TWRP, you would know that. If you saw any of the shows that Nelly had dragged Murphy Lee onto, you would know that. If you happened into the same sandwich shop as Murphy Lee, you probably would have known that. The man’s promotion was as subtle as a sledgehammer, and just slightly a notch below Macy Gray’s Grammy dress.

But I digress… I spent several weeks watching hopefuls and picking my favorites. Going into the finals, I was rooting for Michelle and Twitch. Both of them are amazing dancers and have an incredible range. Tyler and David are no slouches, but I can’t see them having long lasting careers as dancers. David’s got his own style, but he’s a one-trick pony and Tyler is cute, but he’s not in the range of Michelle or Twitch.

The high-energy finale was live, and they did a great job of keeping the audience entertained throughout the show, when most would normally tune in at the end for the winner. Debuting JC Chasez’s solo tracks was inspired, even if I kept blushing throughout the performances. The look back at some of the more colorful hopefuls at the trials added some laughs, as did the skit with Wade’s mulleted alterego. Wade put himself in the spotlight again with a Michael Jackson tribute, which also included three finalists.

And then there was the original Wade music, and the original Wade choreography showcase. I had warned Amanda about it, and when she called me screaming in near hysterical laughter I knew she’d finally reached that in her viewing. Aside from the fact that the beat has tinges of David Bowie’s “Fame” (with “Wade” taking place of “Fame”), this piece introduces the “W” hand sign that is fairly prevalent throughout the rest of the finale. Think of the Vulcan “Live Long and Prosper” sign, and twist your middle and ring finger together. It makes a “W” and makes us laugh. Michelle has taken to asking if Wade is now “West Side Wade” and I want to know if we PopGurls need to develop our own handsign. lunec and I may have to fight it out for the “L.”

First David was eliminated, which was no real surprise. Twitch was next to go, which was quite a shock – and appeared to be a big surprise to Wade, who gave Twitch a big hug. A big, long hug. Much longer than he gave anyone else, I’m just sayin’. It came down to Melissa and Tyler and I was completely floored when Tyler was named the winner. Floored. Melissa was robbed, absolutely and completely robbed.

So, as you can tell, I’m quite disappointed that Tyler won. My theory is that he has more web savvy friends who hit MTV.com hard and often. Because in a real competition judged by professional choreographers, he would not have scored the win. I hope that, like the American Idol finalists, that Melissa and Twitch will find representation from their success on the show and rock out in the dance world. And get handsigns of their very own.