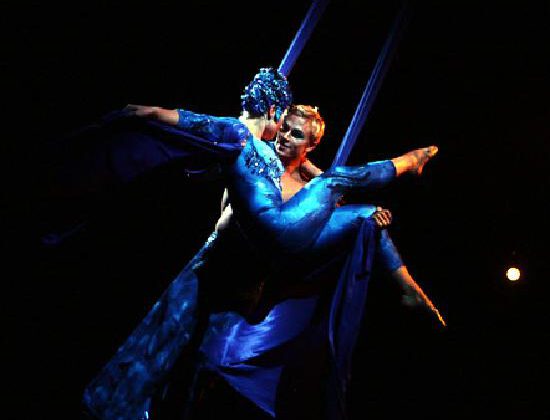 Being – still and always – single, and rapidly approaching 30, is a source of more than a little frustration in my life. One of the unexpected benefits of this situation, however, is the significant time it has given me to reflect on exactly what it is I’m looking for in a potential partner. I don’t mean your everyday prosaic qualities, like sharing a similar sense of humor, or how tall he might be. No, of late I’ve been thinking that what I really need is a circus boyfriend.

Before you start questioning my ability to reason, this perhaps unusual-sounding idea is not coming out of the blue. Thanks to Bravo I have seen major portions of most of Cirque de Soleil’s shows, and earlier this summer I was able to see CdS’s smaller, theatre-based sister troupe, Cirque Eloise, when they were in town. It’s this event that brings us to the crucial point: when I say “circus boyfriend,” I’m not looking for a carnie. I don’t have any interest in bad teeth and an innate sense of how to cheat people. Neither do I want your traditional three-ring showman, coercing animals best left in their native habitat onto and off of tiny platforms and through flaming rings, or racing motorcycles in a chain-link Sphere of Death. No pyrotechnics and flash allowed – I want a man who’s not afraid to show off, yet whose feats come not from narrowly avoiding imposed danger, but from pushing himself farther than most others are prepared to go.

What I really want is a Cirque-us boyfriend: Part acrobat, part clown, part raconteur. No funny wigs or garish face paint, though; I want a man who will sing wild Italian songs and dance on top of the table. I want a man with at least four exotic-sounding names, like Ibrahim Nestor Salvatarin Chantecaille; who speaks his English tinged with French, and knows how to trip without hurting himself. I want him to play the cello and move with self-contained grace and lift me over his head – maybe with just one hand. I want him to dye his hair, or shave it off. I want him to whisper gypsy love songs in my ear. To dance the flamenco beautifully – even with his arms around another man while playing the accordion. I want someone eclectic, unusual, just a little bit wilder than I expect.

A Cirque-us boyfriend would, of necessity, be on the road a lot. I want a man who will write me letters that make me laugh while he is away, every day if possible. But I won’t begrudge the days he misses, because while he is off living his life in days spent with makeup and song, so am I, unencumbered. I want someone with whom I can share anything, but who chooses me because I have a life of my own. During the day we follow our parallel roads, and at night, I can lie in bed and imagine him tumbling before a backdrop of painted stars, his skin glistening in the rain and lit by a follow-spot or the moon, while I swing an ever-widening trapeze arc over his head, knowing that when I fall he will be there to catch me.