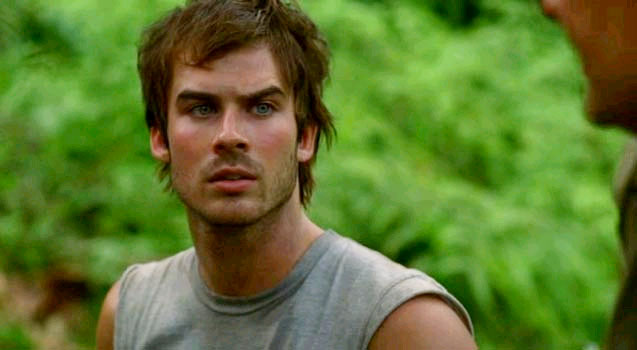 The hit television series Lost is a bit like a bag of Hershey’s miniatures — there’s a little something for everyone. At least in terms of boys. Whether you’re into big and funny or blond and broody, Lost has an attractive man for every palette.

Not sure which one is for you? Take our short quiz and find out. (We recommend a pencil and paper, unless you’re one of those freaky people who can keep track of things in their head. And if you are, we suggest you not take the quiz at all – Locke is probably for you.)

2. You’re dating someone new, and he invites you to dinner. Where do you hope he takes you?
a) Morton’s Steakhouse
b) That Indian place you’ve been dying to try
c) Food is nice, but alcohol poisoning is better
d) KFC. Mmm! Biscuits!
e) O’Malley’s Irish Pub
f) A sushi restaurant in Chinatown
g) There’s this place in West Hollywood where Ben Affleck once spent $1500 on tapas…

3. Which of these Britney Spears lyrics do you most closely identify with?
a) “If there’s nothing missing in her life then why do these tears come at night?”
b) “Now I’m stronger than yesterday, now it’s nothing but my way”
c) “We don’t need to touch, just breathe on me”
d) “Oops, I did it again”
e) “Passed out on the couch yawnin’, it don’t stop ’til the early mornin'”
f) “Crazy, but it feels so right”
g) “Top down, cruisin’ on the strip, lookin’ in the mirror and I’m checking out my lipstick”

6. There are 250 channels on cable. What do you stop on?
a) Dr. 90210
b) National Geographic Explorer
c) Fear Factor
d) Viva La Bam
e) Pride and Prejudice
f) Iron Chef
g) E! True Hollywood Story…The one about the Hilton Sisters

If you chose mostly A’s, your dream guy is Jack. He’s handy to have around when you need someone to take charge, and he isn’t afraid to pull a MacGyver in a medical emergency. Jack will be a great companion, once he gets over his Daddy issues. Also, once he gets a divorce. (Or you find out his wife is dead, whichever comes first.) Has a killer guilt complex.

If you chose mostly B’s, you have a thing for Sayid. His ability to fix almost anything will be handy to have around the house. Plus, if the two of you are ever lost in a rain forest, he’ll remember which side of the tree the moss is supposed to grow on. He’s never afraid to show you how he feels, so you’ll have to be careful not to hurt his little feelings when you escape from prison decide to move on.

If you chose mostly C’s, you’d like to get it on with Sawyer. It’s probably a good thing not to expect too much from him, but at least he’ll look pretty while he’s screwing you over. If you’re lucky, he’ll read to you in bed before you partake in the hot sex. You’ll have to get over the fact that he once killed a man but, really, who hasn’t?

If you chose mostly D’s, you prefer big guys like Hurley. He’ll drive you around in his Hummer, and will even let you choose which Tupac CD to listen to. He gives good hugs. You might want to avoid sharp objects, anything that can be set on fire, and curbs. Strong believer in the phrase “the numbers never lie.”

If you chose mostly E’s, you are a perfect match for Charlie. Chances are good that you’re taller than him, but if you don’t have an issue with it he won’t. You might want to stress that you aren’t just dating him because he was in a band, or else you’ll never hear the end of it. Lock up your diary and the silver when he stays over.

If you chose mostly F’s, you might want to get to know Jin a little better. It is possible that you will face a language barrier. The good news is, he’ll make you dinner as often as you want, as long as you like sushi. The bad news is, he might beat up the FedEx guy if he thinks something fishy is going on.

If you chose mostly G’s, Boone is the guy for you. Be patient with him, and he just might fall in love with you once he gets over being in love with his step-sister. Some might argue that he’s dead, but we’re guessing that’s just a temporary setback.