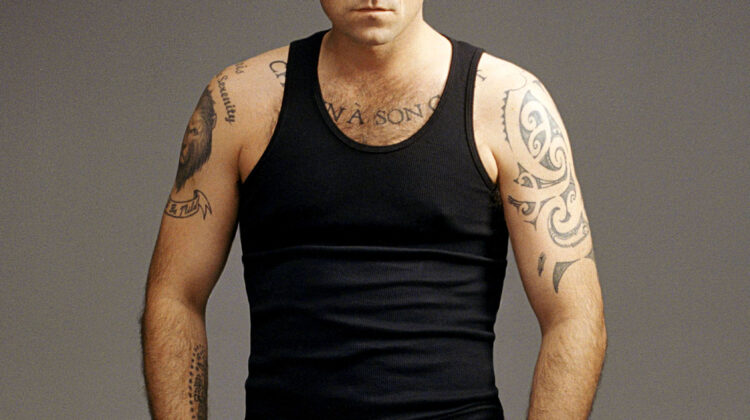 Messrs. Timberlake and Chasez, take note: Robbie Williams is your future. Once upon a time, when the boyband phenomenon was in its infancy stage and *NSYNC hadn’t even begun their European schooling, five young men from England sent hordes of girls into a screaming frenzy by singing and swiveling their hips. Take That was their name, their only song anyone in the States might recognize was “Back for Good,” and Robbie Williams was known as the Untalented One.

Alas, all good things must come to an end, and eight years ago Take That announced their dissolution. (To give you an idea of the panic this caused, telephone hotlines sprung up throughout the British Isles, designed to talk down suicidal teenies unwilling to face a future without the group. Seriously.) Jump ahead four years or so. Robbie Williams, the lone member of the group to have a successful solo career, has huge UK and international success, but only gets as high as number 10 in the US, for his songs “Millennium” and “Angels,” both off The Ego Has Landed. And then, last year, EMI records announced they had signed Mr. Williams to what may be the largest recording contract of all time, worth from $50 to $100 million, depending on who you believe. All so he can break into the US scene.

Escapology is the first album to come out of the deal. It’s an album filled with catchy hooks, melodic arrangements, and pop beats. It sounds like any album put out by Britney, Pink, or even recent Elton John; that is, fun, hummable, and generic. On first listen, my main impression was of a solid mass of nice, overproduced radio fodder. I liked it while I was listening, but couldn’t remember the bulk of it after it was over. If Escapology had been released by any of the aforementioned artists it would no doubt be a platinum hit and have singles filling the rapid rotation slots on Clear Channel stations nationwide for months to come. Instead, it was released by a virtually unknown former boybander with only limited US credibility. How is this album going to achieve the kind of sales necessary to make EMI’s gamble worthwhile?

To answer this question requires a little more investment on the part of the listener, because what sets Escapology apart is the writing. All the songs on the album were written or co-written by Williams, and they benefit from his intelligence, his attitude and his humor. (The sole exception, “Nan’s Song,” is pure shlock. I feel somewhat guilty writing this about a song about the death of his grandmother, but there it is.) “Sexed Up,” is a smart break-up song; it sounds like it was written by your best male friend in college, the one with the string of psycho girlfriends. “Come Undone” has an incredible, sing-along chorus, and unless you’re paying attention you won’t realize it’s also a cynical fuck-you to the music industry and his own bad decisions. In “Monsoon,” he lampoons his own celebrity, telling all the women who’ve kissed and sold, I’m glad that spending a night with me guaranteed you celebrity. “How Peculiar,” with its Perry Farrell-meets-Bono vocal distortion and scrambled verses is…peculiar, but mercifully free of the tired clichés hounding most of today’s popular songwriting. And the chorus is addictive; I find myself singing it while I’m washing the dishes or driving down the street.

My favorite moments, however, are the ones that I can’t imagine coming from anyone else: “Me and My Monkey,” a mariachi-laced fantasia about a hedonistic trip to Vegas with a dangerous, well, monkey, or “Handsome Man,” a tongue-in-cheek paean to his own brilliance. You can’t argue with popularity/Well, you could, but you’d be wrong If Timberlake sang a song like this, I’d be worried he meant it. With Williams, the words are sharpened with irony; he’s survived instant superstardom and its equally instantaneous loss, a cocaine habit, and the scrutiny of the press, and he not only talks, but keeps a sense of humor, about it.

I don’t expect Escapology to turn Robbie Williams into a US sensation. It doesn’t hit you over the head. But the pretty, overdone surface masks actual depth; as if a Miss America contestant actually answered the question in the interview portion of the competition – and she was funny. And this is where I would like former boyband members everywhere to pay attention: it’s not enough just to be charismatic and earnest. To survive, you have to be able to appreciate the ridiculousness of your situation. While this may not make his record company ecstatic, it is what will keep me buying Williams’ albums.