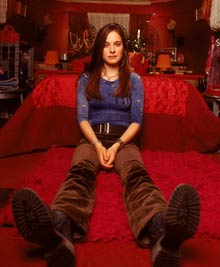 The sadly canceled FOX caustic-romantic-dramedy Wonderfalls is now available on DVD. I’m here to tell you why to watch, and why, despite the press’ comparisons, this is so not Joan of Arcadia.

There is no god. There is no message in morality. No one asks any tough questions about why the kid in the wheelchair can’t walk, and why there’s a serial murderer running loose.

There is a talking monkey. And an emergency tracheotomy. And hot girl-on-girl action. But definitely no god.

Think back to your early twenties. Fresh out of college, you had a $40,000 piece of paper claiming that you were better than the unwashed masses. You thought you had the key to the kingdom, and, yet, couldn’t find a job due to “lack of experience.” Surprisingly, no potential employer actually gave a shit whether or not you thought Pirsig was right about classical thinkers. Instead, they gave you a typing test, and quizzed you on your proficiency with clipart in PowerPoint. Ooooh, the bitter, bitter gurl you became.

This is Jaye Tyler, except she works retail in a souvenir shop in Niagara Falls. She’s a register jockey, not a cubicle drone. But it’s all the same despair and apathy. She’s stuck, mostly due to her own self-imposed inertia, frozen in a sea of ceramic ashtrays and stuffed toys.

Remember how, back then, all you wanted out of life was a nap and a shot of tequila and to be left alone?

And the whole arrogant, “I’m so much smarter than all of these other tools” mentality that, well, I still have that. Other people may have grown out of that.

Our heroine is Lucy Ricardo dipped in battery acid. She’s constantly tripping over herself in spite of her efforts at cool apathy.

If your Hello Kitty pencil started giving you commands to do something ridiculous, and wouldn’t shut up until you did the ridiculous thing, you’d pass out, think you were nuts, and become incredibly annoyed. Eventually you’d just go with it. This is what Jaye does.

So why should you watch Wonderfalls?

You can’t identify with anyone who runs through the rain in a tank top and hip huggers: Jaye does do some running, but it’s in an overcoat. She also gets punched in the head. She looks like a real person, who sometimes gets lettuce caught in her teeth. She’d be really annoyed by how adorable her scowl looks to the rest of us.

You have no heart: Well, that’s good. Wonderfalls won’t try to warm it. It’s a surreal romantic comedy in which the girl who doesn’t really have a heart is forced into the most horrific of circumstances… She has to give destiny a hand in matchmaking. This is Jaye Tyler’s personal hell. In other hands, this would be smarmy, weak bullshit. In Jaye’s hands, the irony reaches out and bitchslaps you.

You have a “thing” for your local bartender: Who doesn’t? He’s a boy who smiles at you and gets you drunk, and pretends to listen to every banal thing you have to say. Jaye has a “thing,” too, though she’d not admit it. And this bartender? He’s smooth and creamy like Haagen Dazs. He should be dancing his ass off in a GAP commercial. I’m not sure if he ever says anything, because I’m too busy thinking thoughts that make me a filthy, filthy gurl. You’re going to make LiveJournal icons of this guy.

Law & Order isn’t funny: No. No, it isn’t. It isn’t funny that Dick Wolf has 53 incarnations of his show about Terrible Crimes Against Vaginas. Watch something different that doesn’t question your intelligence. You don’t need something “ripped from the headlines” because you actually read the whole story, and don’t need Dick Wolf to explain shit to you. Wonderfalls assumes you’re bright.

You need decorating tips for the small, suffocating hovel you call home: I live in a studio apartment. The only thing keeping me separated from my neighbor is a Bettie Page poster in the kitchen. If I lift it up, I could punch through the wall and steal my neighbor’s spice rack. Jaye lives in a trailer park. Her home is a tin can, but my jealousy is epic. She has a bedroom door. It’s warm and cozy inside, which probably says a lot about Jaye. Though she’d spit venom at me for saying so. But that’s why we like her.

You really, really miss Buffy before she became so friggin’ morose: Remember when Buffy had a sense of humor? Think way back. She was our unlikely hero. Our girl. She had a mission. She didn’t necessarily like it, but she went with it and taught us how to snark like a pro about that which we cannot control. She knew this was all surreal and ridiculous but it was happening to her, so she just sort of dealt. That’s our Jaye. If Jaye could walk over to Season Seven BtVS, she’d slip The First a fin to toss another banana peel under Pain!Buffy’s heels.

You need another hero: Tim Minear is the showrunner at Wonderfalls. He’s killed about every character on Angel at least once. His X-Files ep, “Mind’s Eye” garnered Lili Taylor an Emmy nomination. He once said, and I quote, “There will be an occasional happy, so that it might be crushed under the boot of the writer.”

And he’s writing a romantic comedy. How sick is that? I love it.

Your relationship with your best girlfriend does not resemble anything you saw in Fried Green Tomatoes: The relationship between Jaye and her best girlfriend, Mahandra, is not built on sharing stories of first periods over chamomile tea. They snark at each other, lovingly, and support each other with blunt force honesty. They’re not going to drive off a cliff together, but they’d help each other bury the body and never breathe a word to the Feds. And isn’t that really want you want in a best girlfriend? Mahandra knows Jaye all the way to the bone and is the only person in Jaye’s life who doesn’t take Jaye’s shit, and is allowed to tell Jaye when she’s being an ass.

Other reasons you’ll fall in love with this show include:

I’ve seen four episodes of Wonderfalls and every one of them has given me a reason to squeal in delight at my television. And I’m not really the squealing type. I walked away from each episode grinning and dancing. Television, she doesn’t do that much anymore, does she?

So get together with some friends, order in some Chinese, watch Wonderfallson DVD, and then go out to your favorite dive bar and snark with each other. Make it a regular Friday thing. You’ll be happier for it.