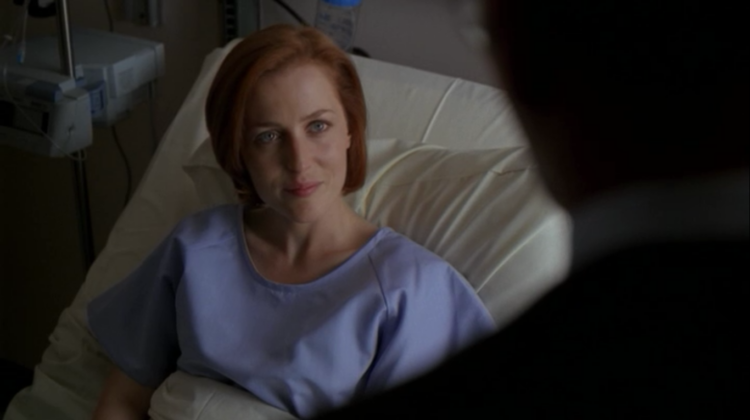 You may ask yourself, as you read this, why on earth I would still watch The X-Files if I think it’s as bad as I say. See, here’s the thing. It used to be better than this. Much better than this. There is some part of me that dreams the impossible dream that it could be good again someday. But now, to the action.

We open this 2-part season finale jaunt into X-Files land with Scully’s baby shower. And thus, we come to the first part of my rant. Scully says, “This has got to be some kind of conspiracy.” And honey, you are so right. It’s a conspiracy against common sense, good writing, and realistic characterization.

But in a way, it’s not really a conspiracy. Because conspiracies are much better organized than this.

Anyway, Scully and I have to sit through her boring baby shower, and the subsequent music of great suspiciousness that plays behind Lizzie, a woman Scully doesn’t know from Adam who is, nonetheless, entrusted with complete access to Scully’s medicine cabinet.

Cut to Billy Miles. (Summing up what we do still know about The X-Files, the guy who plays Billy Miles is still fairly hot. So at least we know that much.) Billy’s killing all the doctors involved in this alien/human hybrid baby mess. You see, it looks like he’s trying to wipe out all traces of the doctors’ experimentations with creating hybrids or (in Scully Jr.’s case) Super-Humans. But I have to take issue with the order in which our Billy goes about his tasks. I get the impression later in the episode that the doctors have experimented with lots of barren women, but they really only believe they’ve succeeded with Scully’s superhuman baby. Since Billy eventually comes after Scully personally, and doesn’t seem to be trying to assassinate the other unfortunate experimented-upon women, why would he kill the doctors first? Wouldn’t it make more sense to go after Scully and the baby first, and then knock off the doctors one by one before they can impregnate again? But if Billy hadn’t killed the doctors first, we wouldn’t have gotten to see…

Mulder shows up chez Doggett, interrupting John’s NASCAR fest. Mulder switches the channel (I always knew he’d be a remote control bogart) to show Doggett footage of the burning fertility clinic, and then informs our poor Doggett that “pissing people off is part of working on the X-Files”. Well congratulations, X-Files writing staff. You’re doing a fabulous job of pissing me off, with this boring arm of the mytharc known as Scully’s Immaculate Conception.

Moving on. Mulder and Doggett go to pay a visit to Dr. Parenti (gee, what a creative name to give to a gynecologist specializing in infertility) and, wait, what’s this? I’ve just been handed an envelope, announcing the 2001 award for the most tasteless shot of a woman’s gynecologist appointment (complete with the stirrups, fer goodness sake) being interrupted unapologetically by two male FBI agents. And yes, our winners are the X-Files writing staff. Congratulations, boys.

Doggett subsequently finds the secret, yet apparently unlocked room with all the hybrid fetuses. I’d tell you what they talked about after that, except I wasn’t really paying attention. I was actually wondering if there was a special at Target on those hybrid fetus storage racks, complete with matching fetus storage jars. Because both of our dead doctors had the same setup. Cuz fetuses make such a unique and bold interior design statement.

Doggett and Mulder leave eventually, but only after Mulder pisses off Parenti and generally makes it clear that he doesn’t trust Parenti at all. Which is why, later, when Mulder finds some evidence he needs to get an opinion on (And no, I can’t remember now what it was. So sue me.) I’m flummuxed as to why he would decide that Parenti is a dandy guy to take it to in order to get an explanation. Oh, yeah. It seems the writers wanted Mulder and Doggett to go back to Parenti’s clinic for the big Unveiling Of The Head-In-The-Jar Moment, and also so they could both get their asses kicked by Billy Miles. So really, that evidence I don’t even remember was just a big, lame excuse to get Mulder and Doggett back to the clinic. Mmmmm, plot.

Several crime scenes later, it eventually occurs to Mulder that he should call Scully. You know, to make sure she’s still alive. Or, to find out if she could give him the inside scoop on who he should bet on in the “Who’s the Father” office pool. Cuz, you know, the FBI stopped sending the checks when Kersch canned his ass, and there are some nice Armani suits he’s got his eye on.

And thank goodness he called while Scully was in the shower. Lizzie, Scully’s new uber-suspicious Girl Friday doesn’t answer the phone, and Scully has to drag ass out of the shower to do it herself. This leads directly to the big discovery of the pill switching, and another trip for Scully to the emergency room.

And poor Scully. It’s too bad Pendrell’s long-dead. If only he were still around, Scully wouldn’t have to trust a random E.R. doctor (Star Trek: The Next Generation’s Tasha Yar, nice to see her getting a little work) to do a chemical analysis of the mystery pills. Work Scully herself could probably do, but never mind that little detail. Pregnancy seems to have dinged Scully’s logic circuit.

Then Billy Miles, the unstoppable, the unrelenting and merciless killing machine, calls the police to turn himself in. The boys promptly jump at the chance for an easy arrest, and they leave Scully by herself with her more human than human fetus. Ah, yes. This won’t backfire a bit.

Of course, it’s a clever misdirection, and when Mulder deduces this, he races back to Scully’s apartment to whisk her away to “somewhere safe”. Mulder gets parked in at Scully’s apartment (isn’t that always the way?) and Krychek comes out of nowhere to run over a cardboard cutout of Billy, oops, I mean, there’s a really good special effects shot here, and our boy Krychek proceeds to save their asses. Don’t even bother asking why Krychek wants to save the baby now, when he wanted it dead before. You may want logic, but I guarantee you will not find it.

They retire to FBI HQ to regroup, and they all have a nice little discussion about alien babies and human replacements with Krychek. Skinner asks Krychek what the alien replacements want. Well, Skin-Man, obviously they want those unsightly moles removed from the backs of their necks. Cuz those are nasty. Somewhere in all this mess of a conversation, I seem to have noted that Doggett says, “I don’t believe this crap.” Testify, brother.

With the Krychek Conversation of Great Exposition When We Should Have Been Running Like Hell now over, we discover that Doggett has called Agent Reyes in, and the great Scully evacuation begins.

Billy crashes the party again, but through some careful elevator hijinks and a well-placed, alien-replacement-controlled garbage truck, Scully and Reyes escape. Or something. Why none of the boys went with them, I cannot tell you. Not until next week, when we’ll wrap up this KnockedUp!Scully mess once and for bloody all.

This could also be called, “I’m so done with The X-Files“.

I realize this sounds melodramatic. This isn’t some overly self-important threat to Fox to change the show so I’ll watch it again. It’s simply that the mere act of spending a full hour of my life (which I’ll never get back) watching the season finale of The X-Files has caused me to re-assess my future Sunday evening plans. It’s a personal decision every couch potato must make for himself or herself.

The most annoying thing to me was the many parallels between the Mary/Jesus birth and the Scully/Scully Jr. birth. It was hinted at earlier in the season. In the finale, it was as if it was a large stick that Chris Carter was bashing me over the head with. While there are so many ways I’m sure this parallel could offend religious people (which I’m not) it merely annoys me. To me, it’s as if Chris Carter recently found God and decided to use The X-Files as his bully pulpit to spread the word. When Mulder followed the star to the birth site, that was the last straw of tolerance broken for me. Come. On. “I saw a star, and I followed it.” Gag.

Next, at the end of the episode, we find out the human replacements appear to have been the ones trying to protect Scully and the baby. It isn’t until near the end of the episode, when one of them (sheer boredom prevents me from remembering which one) states menacingly, “This baby will be born.” Ah, so they’ve been protecting Scully and the baby all this time. So Billy Miles and his murderous rampage leading him closer and closer toward our Pregnant!Scully was apparently all done to protect Scully and her baby. From this, we can assume that Krycek and his accomplices (if any) were the ones who were really out to keep the baby from being born. Which makes more sense than last week’s Krycek, who all of a sudden seemed to want to protect the baby, when before he tried to get Skinner to influence Scully to stop the pregnancy.

But that doesn’t make any sense either. Cold-blooded Krycek could have killed Scully and her baby a hundred times over. They were alone together, or nearly alone, more times than I care to count in these last two episodes of the season. So what was the deal with that? Who knows? (shrug) Who cares is probably a better question.

And then there’s the ending. I didn’t even want to get started on the ending, but how can I leave it alone? After the Lone Gunmen, playing the role of the three wise men (or is that the three cancelled men?) who bring to the child their frankincense, myrrh, and computer chips, our Mulder and Scully are left alone to ambiguously answer the unspoken question…which, as a ninth grader might phrase it, is “Did they do It?”

And the answer given to us is, basically, decide for yourself. Mulder and Scully speak their lines which tell us they know the truth and that’s all that matters, as they say before their “kiss” (of which, all I can say is that it looked to me like David Duchovny and Gillian Anderson cannot stand each other in real life, because it looked like two people who wanted to be anywhere but where they were, doing what they were doing. But who could blame either of them at this point?)

So it’s up to you to decide how you want the truth to be. If you want an immaculate conception, just decide that’s what happened, and there’s your truth. If you wanted Mulder and Scully to have their moment of bliss turn into a miracle pregnancy, just decide that’swhat happened, and there’s your truth. If you’d rather believe the past two seasons were one long dream, one long waste of time, well, there’s my truth. And let me tell you, this season finale woke me up from that dream. And all I can say is, why didn’t someone wake me up sooner?