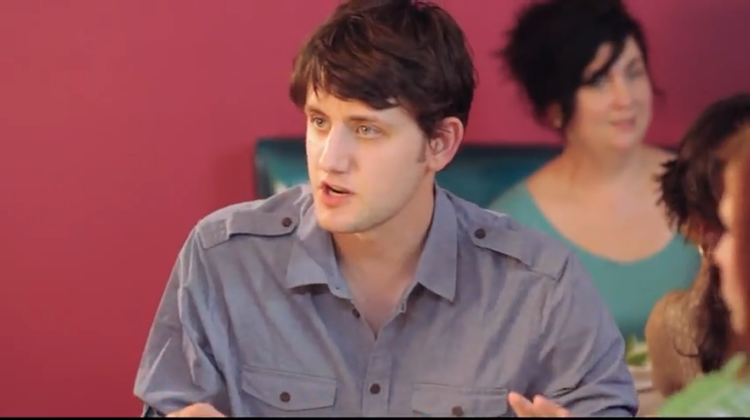 Look, I’m not usually this forward. I’m more of a wait-and-let-him-make-the-first-move kind of girl. But I’ve been coming here, to the UCB Theater in Chelsea, approximately four times a month for the past however-many months, and you still haven’t gotten the hint. I swear one time we made extended eye contact during a show, but even as we gazed deep into each other’s eyes while Shannon O’Neill did a scene wherein she was sucked into her own vagina, the spark between us did not turn into a fire. So I’m just going to come right out and say it.

Zach Woods, we need to bone.

I know, I know. It seems insane. After all, you’re on The Office and I am barely employed in an office. But love has summited more seemingly-insurmountable obstacles than this! You’re basically the Prince William of the UCB (with better hair), and I can be your Kate Middleton (with somewhat worse hair). But we wouldn’t even need a royal wedding. Or any kind of wedding, for that matter. All I ask for is one solid night of good old-fashioned boning.

Here’s the deal. You are one of the funniest improvisers currently working in New York. Your gift for playing the straight man and garnering huge laughs simply by stating the game of a scene is unparalleled. You have taken your talents to screens both big and small. But that’s not my point here. My point, sir, is that you are an eminently boneable man. You are approximately six feet and three inches of comedy dreamboat with very blue eyes. You do this thing where, when you’re not in a scene, you lean against the back wall of the stage and tug at your hair. Your clothes all seem to be just a little too big on you, but in a really endearing way like you just don’t care that much about clothing, which I super respect and find adorable. You are cute, sir. Very, very cute. And I think we should bone.

“But what does this random chick sexually harassing me online bring to the table?” Good question, Zach Woods! Here’s what I got. I’m 5’2”, my writing has been published on the Internet, and can troubleshoot all your Apple devices. If your iPhone is doing something weird lately, I’ll totally take a look at it. After we bone. (If you don’t have an iPhone, I can also probably take a look at your iPod or your Macbook. I’m pretty good at this stuff and I don’t give you judgmental looks like those snobs at the Apple Store.) Think about it. It’s a pretty excellent deal. One sweet night of boning a petite chick with brownish hair, and I’ll fix that weird thing your iPod does when you put it on shuffle!

“But will we have chemistry?” Hell to the yes we will have chemistry! For instance, you once played a zombie in a Starburst commercial. I love Starbursts and am indifferent to zombies. Something to talk about! Or we could skip the conversation altogether in favor of going to see a showing of The Avengers, followed by a light post-movie meal. Sushi, perhaps? I will pretend to like sushi for you. But only if it’s followed by boning. Same goes for The Killing. If you want to watch The Killing before, during, or after the boning session, I can get on board with that, even though I feel the same way about The Killing that I do sushi. I am willing to drink Brooklyn Lagers (the worst of New York’s local beers) or eat some kind of pineapple-flavored dessert (the worst fruit) so long as I am with you. As long as we’re boning, it’s all right by me.

So here’s the deal, Zach Woods. You’re super cute, like the living personification of a baby giraffe that also happens to be really, really good at improv. You’re a dude Zooey Deschanel in a hoodie; a totally delicious midnight snack; must-see TV that keeps me coming back each week. I am an able-bodied and relatively normal-looking female human of legal age who just happens to have a big dumb crush on you. Clearly, we’re some kind of romantic comedy meet-cute waiting to happen – but, well, I’m tired of waiting for that meet-cute to happen on its own! Sometimes, you gotta grab destiny by the scruff of its neck, write an earnest and somewhat pervy essay, and publish it on the Internet! And look, my friends are tired of me talking about how I have a celebrity crush on Gabe from The Office every time they’re going around waxing lyrical about Ryan Gosling abs or Benedict Cumberbatch’s cheekbones or whatever. But my friends don’t understand. They don’t know about our love.

The love that will surely, undoubtedly flourish as soon as we get to boning.

(If not, maybe we could at least make out?)